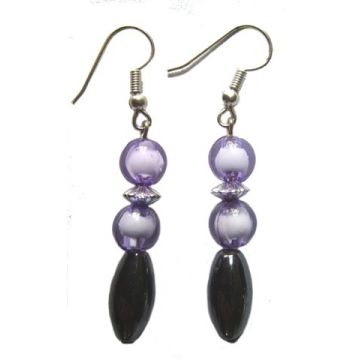 Hematite Earring,with 925silver , Packing: opp bag+card , Quality: Grade A
Hematite meaning and properties
Hematite is used to improve relationships. If you need your personal relationship to be better, carry a hematite with you always.
The name comes from the Greek word for blood. It has been used as an amulet against bleeding, and so is known as the "blood stone". When arranged like the petals of a flower, it is referred to as the "iron rose". Native American folklore states that war paint made from hematite will make one invincible in battle. People in the eighteenth and nineteenth centuries wore hematite jewelry during mourning.
Scientists of the Mars Exploration Rover Project believe that deposits of hematite on Mars may help prove whether large amounts of liquid water ever flowed on Mars' surface. They say that where water was, life may have had a chance to thrive as well.
Hematite is good for increasing intuition. In jewelry it is best in a ring worn on the left hand.
Healing properties of Hematite
Hematite stimulates iron absorption in the small intestine, which in turn improves oxygen supply to the body. It can be in direct contact with the skin, but results in inflammation for some people, so test it carefully on yourself before use.
Sources of Hematite
Brazil is the most important source of hematite. Other sources include: China, Canada, England, and Germany.
Cat`s Eye Stone (meaning): In color it resembles the color of the neem fruit with silver streak which comes in chrysoberyl stone. It also comes in other colors like black, black & white, yellow, pale blue and light red. It clears obstacles hindrances and wards off evil effects of witch crafts. It can be profitably worn by politicians, who aspire for higher positions and authority. It is highly recommended for those, who do not have well placed Ketu in their natal charts. The malefic effect of Ketu is to cause loss of reputation and to increase jealousies and rivalries as a result of th natives popularity. Proper use of this stone will ease matters considerably and safeguard them from scandals, loss of reputation.
Cat`s eye stone also gives the powers of strong determination to do things and is highly recommended for those having birth numbers 2 & 7, or those, who are governed by the planet moon.
Cat`s eye stone though inexpensive, except chrysoberyl cat`s eye, has been tested and tried and is capable of relieving the tensions of the wearer, particularly for the fear of the impending hardships. It is good for those suffering from allergies or skin disorders. It can also be worn by those, whose sun is debilitated in their natal charts of for natives of birth numbers 1 & 8.
Cat`s eye stone is highly recommended for those, who are in business. It protects the wearers against losses in business and ensures financial stability. Rich and wealthy persons can wear it as it will act not only as a guardian of its owner`s wealth but will lead to further accumulation of riches.
Cat`s eye stone works well if Kethu (dragon`s tail) be placed in 6, 8 or 12th from venus in the natal chart. It gives comforts. If ketu (dragon`s tail) is in Lagna, use of this stone will prove to be beneficial. The stone acts as a guardian of the wealth of the wearer. It protects the wearer from all kinds of misfortunes. This stone if it is of a good quality, can take the person to top. It can cure ailments such as heart trouble, hemorrhage and increases knowledge, longevity and strength and cures otherwise chronic and incurable diseases.
An Indian princess, who was constantly under distress and experienced series of untoward happenings went for a really good cat`s eye stone and all her problems where solved within a few days of the wearing of this gem. Even inexpensive gems can help in the solution of difficult cases. Its color is gold yellow, greenish white or urine color. When seen the light it resembles like the eye of a cat.
It is useful in curing cancer. It is also effective for skin disorders, allergies etc. It can be helpful for general good luck in the case of natives who do not have well placed Kethu (dragon`s tail) in the natal chart.
Hematite Earring Magnetic Earring Jewelry Earring
prevHematite Earring with 925 silver hook nextHematite Earring With 925 Grass Silver Hook
Gemstone Jewelry> Gemstone Earring> Conch Shell Fossils Animal Dangle Hook Earring
Gemstone Jewelry> Gemstone Beads> 14MM Loose Natural Gemstone Crystal Round Beads
Hematite Jewelry> Hematite Beads> Hematite Cross Beads 10x10mm for making jewelry
Gemstone Jewelry> Gemstone Beads> No-Magnetic Cross Hematite Beads 10x10mm
Gemstone Jewelry> Gemstone Beads> Natural 10x18MM Semi Precious Stone Cylinder Beads
Semi Precious Stone> Turquoise> 10x18MM Turquoise Tube Jewelry Beads
Natural Crystal> Amethyst> Natural Real Amethyst Cylinder Beads 10x18MM
Agate & Onyx> Carnelian> natural Red Carnelian Chakra Cylinder Beads 10x18mm
Semi Precious Stone> Aventurine-Green> Natural Cylinder Green Aventurine Jewelry Beads 10X38MM
Semi Precious Stone> GoldStone-Red> Natural Cylinder Red Goldstone Beads 10X38MM
Natural Crystal> Rose Quartz> Natural Cylinder Rose Quartz Beads 10X38MM for Diy Jewelry
Tiger Eye> Yellow Tiger Eye Pendant> Natural Cylinder Tiger's Eye tube Beads 10X38MM for Diy Jewelry
Sodalite> Sodalite Beads> Natural Cylinder Sodalite Healing Reiki Beads 10X38MM
Natural Crystal> Quartz Crystal> Natural Cylinder Quartz Crystal tube Beads 10X38MM for Diy Jewelry
Gemstone Jewelry> Gemstone Beads> 18MM Natural Semi Precious Stone Round Beads Large Hole
Natural Crystal> Amethyst> 18mm Large Hole Natural Amethyst Balls